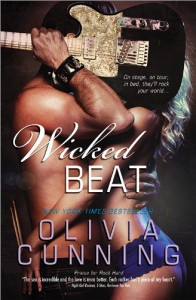 I received my book from Source Books through NetGalley.

This book, while I liked it, didn’t really grab me. It somehow missed the oomph “Hot Ticket” and “Double Time” had. Eric and Rebekah had enough issues between them to fill multiple books, but because there were so many of them, and seemed to follow each other with unrelenting insistency, none of them felt important. And when I say there are a multitude of issues in this book I do mean a multitude; Eric’s childhood, his eagerness in the bedroom and the resulting insecurities as well as Rebekah’s health issues, her attraction to Trey, her former boyfriend, her mother’s problems, the list goes on and on. With so many issues competing for attention I feel none of them got the amount of time they deserved and that in turn made the story feel rushed; almost as if the author was in a bigger hurry to get to the end of the story than I was.

Now that I’ve got that out of the way, I can concentrate on what I did love about this book. With a musician, singer-songwriter daughter and a sound-technician husband these book always feel a little bit like coming home for me. Not that either of them is involved with a hot and famous rock band, but who knows what the future might bring. I love the interaction between the band members. The way they are constantly teasing each other but would do anything for the other members when necessary, is wonderful. The jokes the members of Sinners play on each other had me smiling on numerous occasions.

I loved the idea of Rebekah, a girl, getting the opportunity to work the sound for the band. Music is still a very male operated business and it was wonderful to see that stereotype well and truly destroyed in this book.

I also loved the interactions between Rebecah and Eric. The playful interactions between these two were heartwarming and put grin on my face on numerous occasions. And talking about playful interactions; the role play these two get up to is highly imaginative, not to mention HOT! The way Rebecca and Eric tend to fall out of role play into straight lust was as enticing as it was realistic and wonderful to read. My favourite moments though came early in the story when Rebecah came up with her lessons for Eric. Those were as tender as they were hot and really made me fall for these two characters.

So, overall I have to say that this was a nice and exciting read that could probably have been a bit more if there had been less but more developed issues for the characters to deal with. On the other hand, if you ever find yourself in the mood for hot rockers, independent women, hot and imaginative sex and great fun you could do a lot worse than turn to Olivia Cunning for your next read. I know that I will be reading the remaining Sinners on Tour books in the not too distant future.