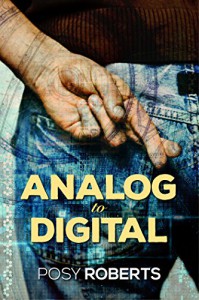 Analog to Digital is a wonderful and sweet Christmas story, a bit of a comedy of errors really.

Poor Ethan, for years he’s been telling his boyfriend, Toby, that he’s not interested in marriage just because he believes that’s how Toby feels. Deep inside Ethan wants nothing more than to be Toby’s husband but he can’t figure out how to share that truth. A visit home for Christmas and to watch his sister and her husband exchange wedding vows for the second time within a year is about the last thing he wants to do. But Toby insists and Ethan loves Toby, so they go.

Things go from bad to worse when Toby keeps on disappearing on Ethan, going off on missions he never has a satisfactory explanation for. Ethan moves from bemused through uncertain to fully convinced that Toby is hiding something from him and maybe even putting distance between them.

What happens next probably won’t come as a huge surprise to the reader but Ethan certainly didn’t see it coming. I read the final fifth of this book with a huge grin on my face and happy tears burning in my eyes once or twice, delighted to see Ethan get everything he thought he would never have.

As always Posy Roberts gave me characters who felt real. Sure, I wanted to slap Ethan once or twice for allowing his doubts to cloud his mind so very fast, but whether I liked them or not, his thoughts and actions were realistic. Toby was utterly adorable, even if he should have realised the turmoil he was creating for Ethan. In fact, I guess it was the fact that these two men weren’t perfect and did stumble once or twice, that made me like them so much.

If you’re in the mood for a Christmas story that will lift your spirits and make you grin hugely, I’d recommend you pick up Analog to Digital asap.