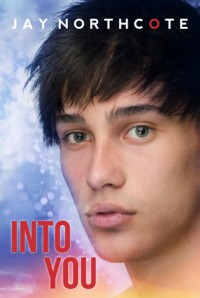 If I had to describe Into You in one word, I’d say ‘cute’. This story and the characters in it are adorable, charming and a joy to spend time with.

Olly and Scott have been friends for years when a combination of teenage curiosity and teenage angst pull them apart. Four years later they still live across the street from each other and their friendship is still a thing of the past.

Also in their street lives an older lady who they’ve never felt completely comfortable around. One day, when the lads are 18, she’s clearly upset when she sees them having an argument on the street. Olly and Scott don’t pay her a lot of attention when she states that fate might need a push in the right direction, but maybe they should have because the morning after they wake up to discover they’ve swapped bodies. In order to function as each other they have to work together; a process that allows them to reconnect and discover things about themselves and each other they’d been previously unaware off.

As I said, this is a super cute story. While the situation Olly and Scott find themselves in certainly leads to introspection and soul searching for both of them, there’s very little angst in this story. In fact, even though they are confused and trying to figure out what is going on and how to fix the situation again, the whole swap is nowhere near as fraught with trouble and danger of being exposed as you might expect. For two young men who haven’t really interacted for four years, Ollie and Scott have remarkably little problems living each other’s lives. Ollie takes to football as if he’s been training for years and Scott, who doesn’t understand Shakespeare and isn’t into drama, takes to the role of Romeo like a fish to water. Because the story isn’t so much about the difficulties associated with a body-swap as it is about two young men reconnecting and finding each other and their joined destiny, that lack of tension makes sense, but it did leave me feeling it was all a bit too easy.

Of course this story is very well written and smoothly told; I’d be surprised if a book by Jay Northcote was anything else. I’m not quite sure how to label this book. Coming of age fits, as do friends to lovers and enemies to lovers, but there’s also a dose of paranormal / magical realism to be found here.

If you enjoy a fun, sweet, very cute and somewhat magical feel good story, I highly recommend Into You by Jay Northcote.