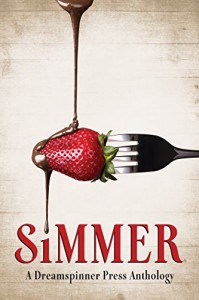 This review focusses on one story in this anthology:

Breakfast at Timothy’s by T.J. Masters

Twenty-four-year old post-graduate geology student Connor Wilson hopes to persuade his professor, the eminent geologist Timothy Shaw, to become his academic advisor. Forty-six-year-old Dr. Shaw is a legend in the field, although his personal life remains a mystery. Over a week of early morning breakfast meetings at Timothy’s home in the village of Grantchester, outside Cambridge, England, attraction simmers between the two men and eventually boils over into steamy passion. Connor is seduced by the food and charm of the very fit older man, and it looks like his dream could come true—in better ways than he ever expected.

Breakfast at Timothy’s is an adorable story; there really is no other way to put it. It was such fun watching Connor (never Con) trying to make sense of Timothy (not Tim) and his breakfast invitations.

The first day Connor arrives at Professor Timothy Shaw’s house for breakfast, all he wants to do is convince the man to be his academic advisor. By the time he leaves again he can’t deny he is deeply attracted to the man. Mixed messages and cryptic answers have Connor second guessing both the professor and himself until suddenly there is no room for doubt anymore.

Except that even when it seems that all the pieces have slotted into place, there’s still room for a surprise for Connor and the reader. And of course I have a weak spot for stories in which what you (think you) see isn’t always what you end up getting.

I literally smiled my way through reading this story. The banter between Connor and Timothy was both intelligent and fun, the various breakfasts the professor prepared and served made my mouth water, the chemistry between the two men was almost palatable not to mention hot, and Connor was a charming and captivating narrator.

I would have loved to spend more time with these two men. Not because I felt there was anything missing in this story, but because I enjoyed my time with them and wouldn’t have minded a longer visit. I can’t help feeling these two men have an interesting journey ahead of them.

On a side-note, I’ve decided that one day I will be brave and prepare ‘Timothy’s French Toast Americaine’ because if it tastes only half as good as it reads, it will be an amazing eating experience. J

Now that I’ve read one of the stories in Simmer I’m rather curious about the rest of them. Curious and also a little bit worried. They say you should never go shopping while hungry; I think the same may well apply here: Don’t read Simmer while hungry.