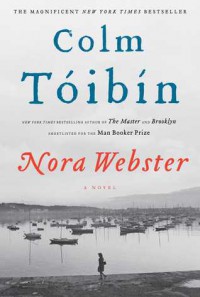 I’m going to be in the minority here. As far as I can tell most people think this is a fabulous book. Critical acclaim has been widespread and lavish. It is quite possible I missed something, but as with Brooklyn before, I was not so much unimpressed as under-impressed with Nora Webster.

The story idea was fascinating. Being a widow with four children in Ireland in the nineteen-sixties must have been very hard, and the same is true for being forced to go back to work when you didn’t expect to ever have to do that again. I recognized the way small town Ireland is described on these pages – not so much has changed in 45 years after all. The curiosity of others and the way people seem to study you, as if to make sure your dealing with your grief in the ‘right way’, were easy to recognised.

My problem with the story was not what it was about but how it was written. To me it felt as if it was being told by a distant narrator, or a narrator trying very hard to keep his distance. Since this is apparently the story of Colm Tóibín’s mother dealing with her grief when Colm was growing up, it is quite possible he wrote it that way deliberately.

The thing is, it just didn’t work for me. Although there were some moments when I could almost feel Nora’s pain, loneliness, and desperation, I felt separate from her and her feelings for most of the story. And, to be honest, I couldn’t really bring myself to care very much either; not about her, and not about her children. And I really didn’t enjoy reading about her lack of involvement with those four children.

There were parts I did like. The moments when Nora crept out of her lethargy and decided to stand up for herself or one of her children, or when she made tentative moves to create a new life for herself, were easier to read. Those moments were few and far between though. For the most part I felt bogged down by Nora’s internal dialogue—which never seemed to go anywhere— and her passivity.

Between very little happening in the story and the writing style almost forcing a distance between the subject matter and the reader, I ran into several occasions when reading on felt like a chore. I’m not sure if I would have finished the book if it hadn’t been a bookclub read. Not because the book was hard to read but because I didn’t feel as I was getting anything out of it. When I finish a book I want to be left feeling emotional in one way or another. This book just left me feeling ‘meh’. And to be honest, only two hours after finishing the book, most of the story seems to have evaporated from my mind. And that does not bode well for having to discuss it, twenty days from now.